Two months ago I started a club which sends random surprise candy directly from Japan to subscribers paying on a monthly basis. The club is called Candy Japan and on this blog I try to describe the business side of it as openly as possible.

Here are my subscriber numbers from the start to today. 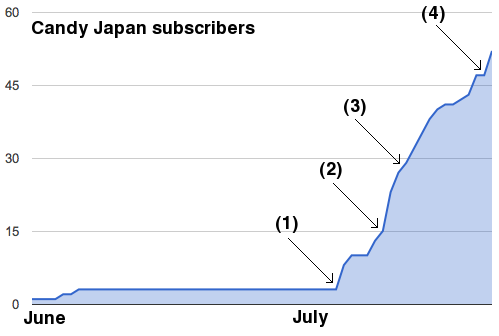 This chart only includes people who are paying me via PayPal, which includes almost all. In the beginning the chart goes from 0 subscribers to 3 subscribers after I contacted some customers I knew from before. At that point the club did not even have a home page.

(1) I finally created a home page for the club and posted about it on Hacker News on July 9th in a post titled "Experiment: Japanese candy subscription service". That directly lead to 5 people subscribing, and a few more in the following days.

(2) The Japan blogs Tofugu and Japanator decide to make my day by mentioning the club on July 14th. 8 people immediately subscribe on the day of mentioning and many more in the following days.

(3) My second post on Hacker News, "Getting my first subscribers". 4 people subscribe right away, more in the following days.

Thanks to everyone for your support and encouragement.