Just released a cross-language baby name finder called MixedName. It shows you names that work in two different languages, so for example if you were looking for an English-Klingon name couple, it'd suggest "Honor", "Victoria", "Gloria".

For a more serious example, if you were looking for English-Japanese names you'd get names like "Erika", "Lina", or "Sara". The site works similarly for other language pairs as well. 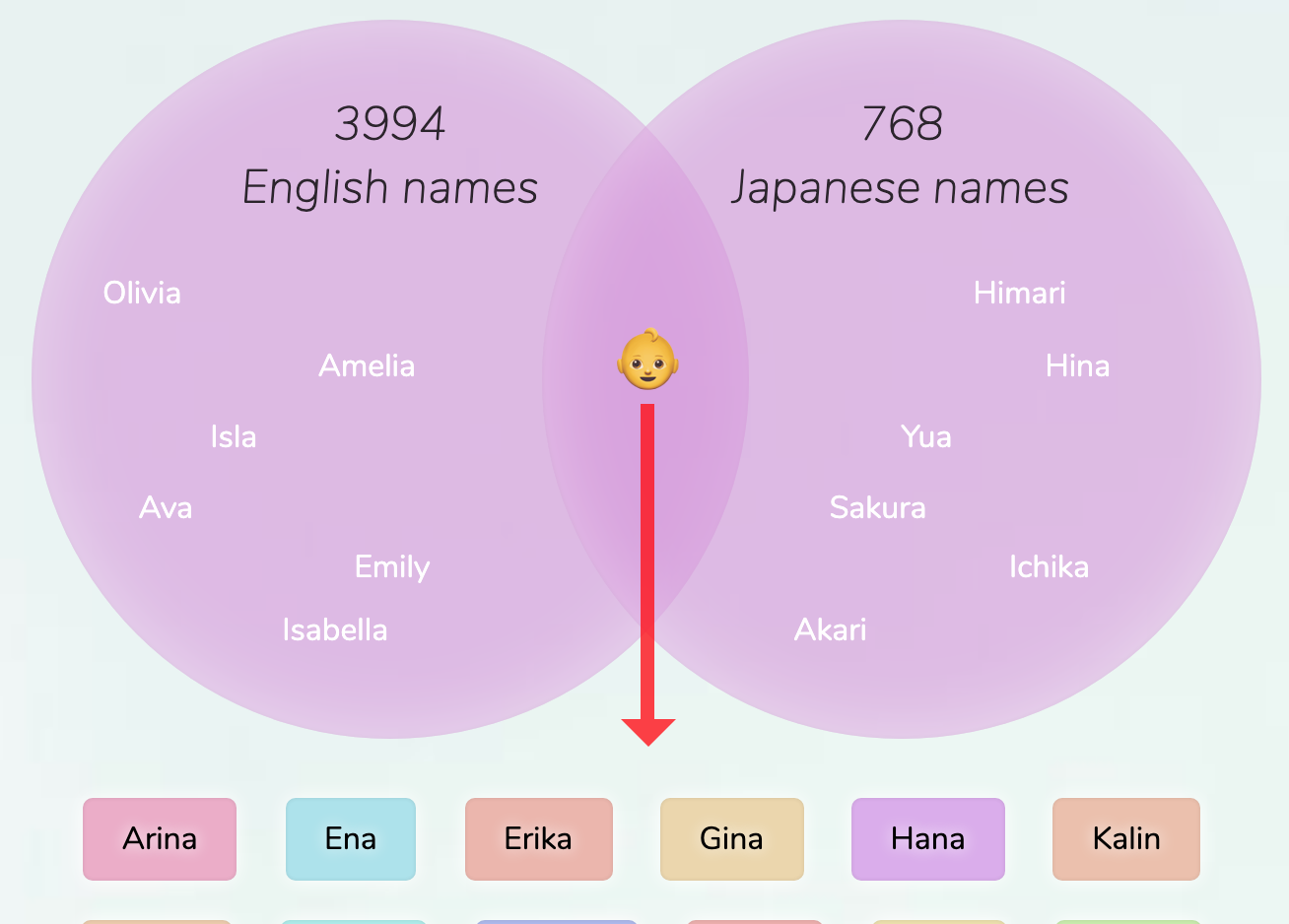 Why did I create this?

I initially started this project to find a Japanese-Finnish name for our upcoming child, so that he could use it regardless of whether he ends up living in Japan or Finland. The first version was just a simple intersection of two name lists, didn't have a UI and only supported those two languages. After using it once I forgot about it, but the directory remained under my projects.

Later on I started getting more conscious about needing to release more things, as after the mild success of Candy Japan, I had been focusing on just running it day-to-day and barely released anything new. While brainstorming what small project I could do, I suddenly remembered this name finder thing.

I gathered the name lists by combining various sources online, from Wikipedia to baby name sites, to etymology sites like Behind the Name, and even a wiki about Klingons. While I can't remember how much time I spent ~9 years ago when I first started playing with the project, I'd guess in total I've spent a week on this.

Besides lists of names, I also wanted to do dictionary matches, so for each language I also needed to find a dictionary for it. For Chinese and Japanese I also transliterated the dictionaries into the Latin alphabet. For Japanese I used romkan, and for Chinese it was a simple matter of just removing tonal numbers from the pinyin text already included in the dictionary.

I spent about half of my time on gathering and massaging all the data, so that these sets could easily be intersected.

From there on I started playing with various ways to find cross-language names from this data. I started with a simple intersection of the names of the two languages, and that does produce the best results. To include almost-matches I added a section for names with close edit-distance.

I thought it might be useful and/or funny to also show names that mean something in the other language, so I also added intersections between the name and word lists. For example you'd find the name English name "Geri" this way, because it happens to mean something (look it up if you must know) in Japanese.

After I had all the data, I needed to do what felt like the most painful part: coming up with a decent website to show them on. I found some venn diagrams online for inspiration, and designed the result pages based on that. The main page is just a simple search field. Simple, but at least I made sure to pick some decent colors, use enough whitespace, and a good custom font.

I usually just post things I've created to Hacker News or Product Hunt, but I've found that doing so often exposes some issue I'd neglected before, which I then have to frantically fix while missing out on a lot of traffic. So this time I wanted a more gentle release, and instead just posted the link to some relevant Facebook groups and subreddits.

People seemed to like it, as the site had 2000 hits in the first 48 hours, and had many positive comments. Traffic did die down very quickly once I stopped manually promoting the site.

Hosting this only costs me about $3 / month, including the domain, so this doesn't need to be a massive success to keep it going. I'll define success for this: Google indexing the ~300 name pair pages I have and sending 50 visits per month for each page on average.

That might enable enough ad revenue to make $30 / month. Which for a one-week project would be a great result. If that happened I would then add more and more supported languages, and new ways to generate names. I also keep getting name suggestions from people, so I'd also like to add a way for people to easily submit those. Voting? IDK.

From doing this project I learned some new Python tricks, and uncovered new libraries (FastText in particular looks great), but perhaps most importantly uncovered a big weakness I have: complete suckage at link building — I have no idea how to get some decent initial backlinks just to get even a half-shot of having something properly indexed.

Thanks for reading, and here's the URL again if you'd like to play around with it: https://mixedname.com