Candy Japan has scaled from sending just a few envelopes a month, to a few hundred and now nearly a thousand envelopes a month. As the volume has increased, some pain points became obvious. One of the most laborous is a silly little sticker you have to fill and attach on each envelope you send. The devil called the CN22 form. 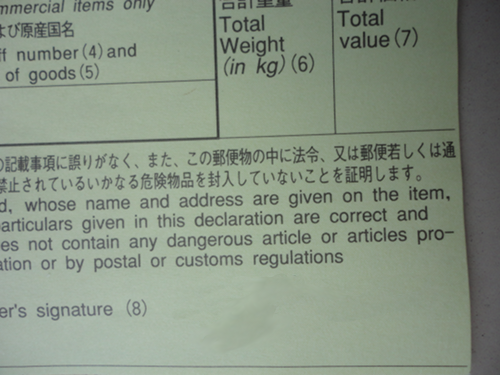 On each CN22 form you have to fill the contents of the package, then sign it and write the date for the sending day. Not a big deal when dealing with just a few, but when you get 400 of them in front of you and have to sit down and spend the next two hours writing by hand the same information over and over again, it starts to feel like a huge waste of time that would better be spent... well doing almost anything else.

The first thought was of course to just print them out. I asked the post office if it would be cool to just print this information directly on the envelope. Not cool. Instead I got extra hands to help me write them out. That didn't continue long before I was again feeling very silly about paying someone to be a human printer.

So I went to another post office and asked the same question again. "Yeah sure go ahead, doesn't matter if it's printed" was the reply from a busy postal office worker. This answer totally contradicting what I heard before, I wanted to make sure I wouldn't get my packages rejected, I started reading the Japanese regulations concerning CN22 forms and discovered that there is a special application form you have to fill out to apply for the privilege of printing these forms.

I filled that out and went to a post office to submit my application. It was pretty clear this was the first time they had dealt with anyone applying for it. Phone calls ensued as they started checking what to do about it. Eventually they refused to accept my application, with the excuse that only big cities like Osaka or Tokyo accept CN22 printed directly on the envelope. I see.

By this time volume had gotten large enough that I was getting postal office workers coming to my door to collect packages. These were people that I hadn't met before, so I decided to test if they would agree to accept my request. The answer was no.

In addition to filling these form stickers, another problem was getting enough of them. Even the central post office would often have only a few dozen of them available at the time. Ordering them by phone I was sometimes able to get a few hundred at a time, but never any reasonable number that would last me more than a few weeks. This would lead to situations where I had to send out packages, but wouldn't have enough of the forms.

My wife volunteered to go on an errand to collect more of them from the Tokushima central post office. While there she again asked if it would be alright to just print them on the envelope. This time she got one of those rarer "yes" answers, totally contradicting again what I had heard the last few times I asked about it.

The next time I had a CN22 shortage I decided to just go for it and see what happens. I prepared 300 packages with a CN22 replica authored by yours truly in Gimp printed on them. As I requested them to be collected, I was expecting a slight chance my whole shipment would get rejected. The result?

Silence. Nothing. No complaints, no rejected packages.